Physical therapy after knee replacement leads to much improvement 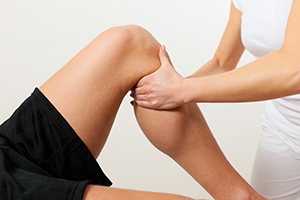 The best approach after being discharged from hospital is not clear

Knee osteoarthritis is a condition in which cartilage that normally protects the knee joint gradually wears away over time, which leads to pain and disability. Physical therapy is commonly recommended as the first line of treatment for this condition, but surgery may be necessary for patients that fail to improve. The surgical procedure for knee osteoarthritis is called total knee arthroplasty (TKA), or total knee replacement, and the number of these surgeries being performed in the U.S. has been increasing steadily over the past 20 years. Following TKA, patients are usually treated with physical therapy to help improve their strength, mobility, and range of motion. Once discharged from the hospital, there are many options available to continue this rehabilitation process and get them back to full strength, and it's not completely clear which approach is the best. Some patients immediately begin a physical therapy treatment program at an outpatient clinic, while others undergo a course of physical therapy at home first before starting at the clinic. To better understand which of these approaches is more beneficial for patients, a study was conducted in which two groups of patients were compared each other.

Data from a hospital protocol used to compare patients

Results showed that after completing outpatient physical therapy, both groups showed improved scores in their knee range of motion, walking speed and quality of life. When compared to one another, there were no significant differences in most of the outcomes measured; however, the group that received outpatient therapy immediately completed their treatment approximately 20 days sooner than those who had home-based therapy first. These findings suggest that after having a TKA procedure for knee osteoarthritis, patients are likely to benefit from any type of physical therapy care. Whether they would like to begin outpatient physical therapy right away or have a home-based therapy program first is completely their choice and should be made with proper education on what to expect. While both of these options will lead to very similar improvements overall, undergoing outpatient therapy first will probably allow them to complete treatment sooner and will cost less as a result. Patients should, therefore, weigh these factors when making their decision following surgery.

-As reported in the November/December '16 issue of Orthopedic Nursing