Two vibration therapies are not effective for treating low back pain 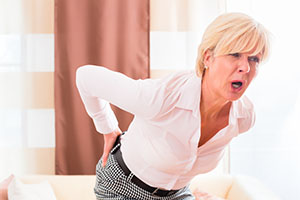 Both treatments commonly used despite lack of supportive guidelines

A diagnosis of nonspecific, or common low back pain (LBP), means that the pain is not related to another condition and usually leads to painful limitations in movement, with occasional pain down the leg as well. Ultrasound and shock wave therapy are two forms of mechanical vibration with similar properties that are used to treat LBP. Ultrasound means the frequency of vibration is above 20,000 Hz and generates heat, while shock wave applies vibration at lower frequencies (10-250 Hz) and causes waves of pressure. The most recent evidence-based guidelines-which all treatments choices should be framed around-don't recommend either shock wave or ultrasound for treating LBP, yet many medical professionals continue to use them. In order to update the guidelines with recent evidence and confirm their authenticity, a powerful systematic review was conducted using all available literature on the effectiveness the two therapies for treating LBP.

CENTRAL, MEDLINE and EMBASE medical databases were thoroughly searched for high-quality studies called randomized-controlled trials (Rats) that compared ultrasound or shock wave with any other procedures on patients with LBP. This search turned up 1,419 references, 13 of which were assessed. Four Rats were deemed eligible, and consisted of three Rats on ultrasound and one on shock wave therapy. The findings of each of these Rats were reviewed to determine the actual effectiveness of these treatments.

Neither treatment supported by results

Results from this systematic review did not support the use of ultrasound or shock wave for treating patients with LBP, regardless of whether the pain was acute (short-term) or chronic (long-term), or if the patient had leg pain or not. Despite the fact that only Rats were reviewed, most of these consisted of shortcomings and high risk of bias, and any effect of treatments was likely a placebo rather than an actual improvement. Numerous treatments are available for LBP patients, but the use of any of them must be backed by sufficient evidence. The findings of this systematic review don't support ultrasound or shock wave for LBP, and their use should be questioned and fully explained to patients. Other treatments like physical therapy, which has been proven effective for LBP, should be utilized instead.

-As reported in the October '11 issue of The Spine Journal