Listening to music lowers the level of pain experienced during PT 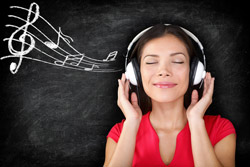 Distraction could be the key to overcoming painful components of therapy

Physical therapy (PT) is a proven effective treatment for many muscle and joint conditions, but as any patient can attest to, the process can also be painful. Pain is an essential part of PT treatment and improvement in most cases is not possible without it. Still, some patients may be turned off by this detail and dread PT as a result. While extensive research is conducted on analgesia (pain-reducing treatments) for severe problems, little is done to investigate the reduction of pain in more minor situations like PT. Some studies show that distraction in the form of virtual reality or music may actually be helpful in overcoming pain and stress, but it has not been tested on PT. Therefore, a small study evaluated if music can be used as distraction and reduce the level of pain experienced during PT treatment.

Treatment with and without music from iPod is alternated

Twenty-five patients between 18-65 years who were seeing a physical therapist were used in the study. Patients were trained on how to use an iPod, which had three different music compilations on it, and then assigned to one of two groups. Both groups consisted of four therapy sessions and alternated between a session with music followed by one without music. The only difference was one group started with a music session and the other group started with a no-music session. At the end of each PT session, patients filled out a short questionnaire that included questions about pain, stress and satisfaction based on the treatment they received.

Pain is found to be significantly lower when music is used

Results from the questionnaires showed that pain was significantly lower during PT sessions in which the iPod was used compared those when it was not. The scores on the other items of the questionnaire did not show any noteworthy differences, which means the music used in this study had a very specific effect on pain. This gives the results even greater strength, because it shows that patients were most likely honest in their answers, since they were blinded to the specific nature of the study. Based on these findings, it appears that listening to music while undergoing PT can reduce the level of pain and make the therapy more enjoyable for patients. Since it is important for therapists to make sure patients can tolerate the exercises they perform, this can be a helpful tool in easing the treatment process. Therefore, an iPod can be an inexpensive and effective addition to a PT practice that may alleviate pain for patients.

-As reported in the December '13 edition of Pain Management Nursing