Common training mistakes for marathon and half marathon runners 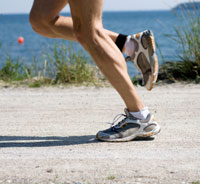 For most runners who participate in marathons (26.2 miles) or half-marathons (13.1 miles), ample time is spent prior to the race engaged in a training regimen to help prepare for the longer distances. In the course of training, or on the day of the race, however, many will commit one of these four common mistakes, which can go on to be detrimental to their performance.

Weekly long runs are considered one of the most important components of training due to the physiological and psychological adaptations they create in the body, which are essential to completing long distances. Robert Chapman of Indiana University's School of Health recommends a minimum distance of 8-10 miles for half marathoners and 15 miles for marathon runners completed at least twice before the race, but ideally further in advance. The following are some of the main adaptations weekly long runs are responsible for:

Mistake #2: Selecting a race without evaluating if a full training regimen is feasible

The majority of marathons take place in the spring or fall due to the preferable weather conditions, and most recommended training programs last for at least 10-16 weeks. What some runners fail to take into account is the fact that the bulk of training for spring marathons will take place in the winter-with much colder temperatures, decreased motivation-and for fall marathons it'll take place in summer-usually with hot/humid conditions and more social obligations than winter months. What's suggested is to simply factor in all aspects of training and the time of year one attempts to complete it before beginning a program.

Trivial details that might go overlooked can cause major setbacks at race time, but if addressed properly, disaster can easily be averted. These are some typical examples:

Most of these issues can be test-driven during weekly long runs prior to the race, so that when race day comes, all minor factors have already been experimented with and perfected.

Mistake #4: Starting the race too fast

When running such great distances, it's easy to go out at an unsustainable pace and wind up not being able to finish the race. Runners should be well aware of what pace they're capable of, and should bear in mind modifications that must be made on race day such as weather conditions. With that pace in mind, Chapman recommends runners take a conservative approach and shoot for negative splits (second half of race faster than first half), which has a greater likelihood of guaranteeing a finish and minimal late-race discomfort.

By becoming aware of these common mistakes and taking measures to prevent their occurrence, marathon and half marathon runners will have a much more likely chance of completing the race successfully and without incidence.