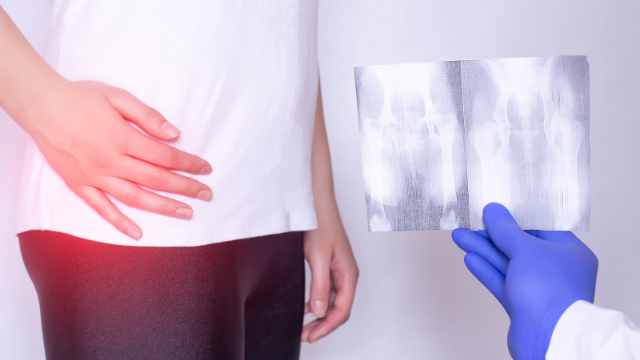 Femoroacetabular impingement (FAI) is a fairly common condition that leads to hip pain and disability. The hip is a ball-and-socket joint in which the thighbone (femur) is the “ball” and the pelvic bone (acetabulum) is the “socket.” FAI occurs when the femur and acetabulum rub against each other during movement, which causes pain and decreases the range of motion of the hip. This condition may develop either due to certain hip shapes that increase the chances of these two bones coming into contact with one another, or it may be related to participation in sports. Athletes—particularly young athletes—that play sports like football and soccer are at an elevated risk for FAI because of the dynamic movements involved in their sport. Patients with FAI may be treated with a course of physical therapy or surgery may be recommended, and it’s not clear which of these approaches is more beneficial. Therefore, a powerful study called a randomized-controlled trial (RCT) was conducted to evaluate whether physical therapy or surgery is more effective for treating patients with FAI.

Researchers invited patients with hip pain and features of FAI to participate in the RCT and screened responders with a specific set of criteria. This process led to 348 patients being included in the study, and these participants were then randomly assigned to receive either physical therapy or surgery to address their condition. Physical therapy consisted of four parts: a thorough assessment of each patient, education on their condition, an exercise program, and relief from pain when it was strong enough to prevent them from performing the exercises. The exercise program took place through 6-10 sessions over 12-24 weeks and was supervised by a physical therapist and repeated at home. Programs were individualized and progressed at each patient’s pace. Surgery was completed using arthroscopic techniques in which small incisions were made to guide a camera and small surgical instruments to perform the procedure. All patients were assessed at the beginning of the study and 12 months later using the international Hip Outcome Tool (iHOT-33), which is specifically designed for measuring quality of life (QoL) in young adults with hip pain.

Quality of life improves in both groups of patients

Twelve months after patients were randomized to treatment, scores on the iHOT-33 improved in both groups. Scores increased from 35.6 to 49.7 points in the physical therapy group, and from 39.2 to 58.8 in the surgery group. Further calculations showed that the average difference in improvements between these two groups was 6.8 points in favor of the surgery group; however, another evaluation showed that physical therapy was more cost-effective than surgery over 12 months. Taken together, these findings suggest that although surgery may lead to better overall outcomes than physical therapy, both treatments are effective for improving patients’ hip pain-related QoL. For this reason and because it costs less than surgery, physical therapy should at least be attempted as a first option. Young athletes and other patients dealing with symptoms of FAI are therefore encouraged to try physical therapy first and see how they respond to treatment before considering surgery.

-As reported in the June ’18 issue of The Lancet