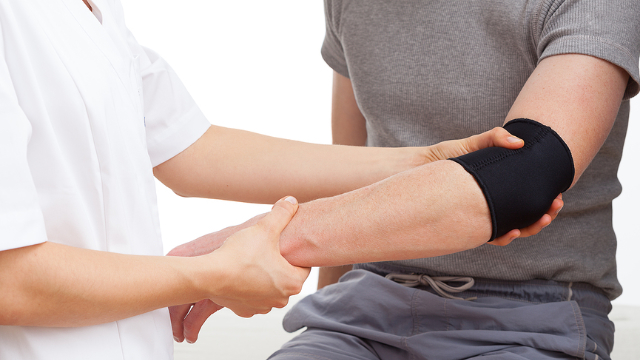 Unclear whether one intervention is superior to the other

Lateral epicondylitis, or tennis elbow, is a common condition that results from inflammation of the tendons that join the forearm muscles on the outside of the elbow. Tennis elbow develops from overuse in sports and is frequently seen in athletes that play tennis and other racquet sports, but it can also develop in anyone that repeatedly performs activities that require the elbow and wrist. Although the majority of individuals that develop tennis elbow will improve after some basic treatments and lifestyle changes, about 20% will continue to have symptoms one year later. When tennis elbow does not improve after three months, it's referred to as “chronic,” which is more difficult to treat. There are many treatment options available for chronic tennis elbow, including a variety of exercises guided by physical therapists, such as eccentric and concentric elbow exercises. Eccentric exercises use the elongation phase of muscle activity, which occurs while lowering weights, while concentric exercises use the contraction phase that occurs when lifting weights. It's not clear which of these—or a combination of the two—is better, and research is limited on the topic. For this reason, a powerful study called a randomized controlled trial (RCT) was conducted to determine if eccentric or concentric exercises led to better outcomes in pain and function for patients with chronic tennis elbow.

Patients are evaluated regularly over the course of one year

Individuals who had symptoms of tennis elbow for at least three months and a verified diagnosis were recruited and asked to participate in the RCT, which led to 120 of them being accepted. These participants were then randomly and evenly assigned to either the eccentric or concentric exercise group. Both groups were instructed to perform an at-home exercise program designed by a physical therapist for the next three months. The “weight” used for the exercises was a plastic water container with a handle that weighed 1 kg (2.2 lbs) for women and 2 kg (4.4 lbs) for men. Both groups were instructed to hold the handle of the container using a clenched fist with their forearm on the armrest or adjacent table. The eccentric exercise group was instructed to lower the weight downwards while flexing their wrist, while the concentric group was instructed to lift the weight while extending the wrist, both for three sets of 15 repetitions. Participants were to perform these exercises once a day for three months, and the load was increased each week by one dL (0.22 lbs). All participants were evaluated at the start of the study and then one, two, three, six and 12 months later for pain, strength, function and several other outcomes.

Both interventions are beneficial, but eccentric exercises lead to better results

After one year, results showed that patients in both groups improved in their scores for pain and muscle strength, but the eccentric exercise group experienced greater overall improvements. This was based on the fact that the eccentric group reported a faster decrease in pain during muscle contraction and elongation, as well as a faster increase in muscle strength compared to the concentric group. This difference between groups was most noticeable at two months, but the trend continued up to the final follow-up at one year. Regarding the other outcomes of disability, function and quality of life, there were no significant differences between the two groups, which suggests that they both improved to a similar extent. Based on these findings, it appears that both an eccentric and concentric exercise program are beneficial for patients with chronic tennis elbow for up to one year, but an eccentric program provides a slight advantage of faster and greater improvements in pain and strength. Both of these exercises are routinely included in treatment programs provided by physical therapists in order to elicit positive changes. Patients currently dealing with symptoms of tennis elbow are therefore encouraged to seek out treatment at a local physical therapy clinic to help them start the path to recovery and better overall functioning.

-As reported in the September '14 issue of Clinical Rehabilitation